Centuries before Chuck Yeager broke the sound barrier in the first manned supersonic flight, mankind was breaking the sound barrier with whips.  In fact, the whip was the first man-made device to travel faster than the speed of sound.  It is unknown exactly when and where the first supersonic whips were developed, but their use greatly simplified the management of large herds of domesticated animals.

As was pointed out in the previous section, These whips were developed as a means to motivate herd animals without having to prod and goad them.  Striking an animal with a striking whip is not only cruel, but also dangerous.  Smacking a potentially ill-tempered bull with a whip was an excellent way for a cow herd to get himself gored, or worse, cause the animal to panic, leading to a stampede.  In addition to that, repeatedly prodding and striking an animal can cause cuts and bruising, which damages the hide and ruins the meat, thereby reducing the market value of the animal if moving them to market.

The supersonic whip creates a loud cracking noise.  Herd animals such as horses, cattle, oxen, etc. tend to move away from loud noises, therefore, cracking the whip behind them tends to cause them to start moving forward.  Crack a whip to their left, they will move toward the right, crack to the right of them, they move left.  You can now easily see how you might steer a steer.  So, while there is no doubt that these whips evolved from the earlier and more primitive striking type of whip, by definition, they hardly even qualify to be called "Whips."

Whips that crack have been in existence for at least three thousand years, but it was only in the last century that we have come to understand how they work, and it was only as recent as 1958, through research with high-speed photography, that it was scientifically proven that the crack from this type of whip is a small “Sonic Boom” generated as the tip of the whip accelerates beyond the speed of sound. Prior to this, there were many ideas as to what produced the crack. General consensus was that it was one section of the whip slapping another section as it made a hairpin turn in the air. Research by Bernstein and Hall demonstrated that the whip was traveling as speeds reaching well beyond 1,100 feet per second.

Subsequent research by Goriely and McMillen defined exactly how the structure of the supersonic whip creates an incredibly efficient and steadily-tapering channel for a wave of kinetic energy to flow along, and shows that the whip is an excellent model for demonstrating the Law of Conservation of Energy. This law can be expressed here as M1V1=M2V2, wherein the M refers to the mass of the whip, (M1 referring to the mass at the handle end of the whip, M2 referring to the tip end of the whip,) and V refers to the velocity of the whip, (where V1 and V2 refer to the velocities at their respective ends of the whip.) The braided length of high-quality examples of these types of whips is very tightly and evenly packed. Therefore, there is very little kinetic energy lost to friction or resistance between the fibers that make up the braid. If there is no loss, then the energy transferred should be equal at both ends. But with the whips steady taper, there is a uniform drop in mass from the handle end of the whip to the tip.  Therefore, following the principles of Conservation of Energy, in order to maintain balance in the above equation, if the mass of the whip at the tip, (M2,) is substantially less than it is at the handle, (M1,) then the velocity of the energy travelling through the whip at the tip (V2) will be much higher than at the handle, (V1).

Simply put, supersonic whips channel kinetic energy in the same way that water pipes channel water. If one gradually steps down the diameter of the pipe one is running water through, the water pressure, (i.e. the velocity of the water,) will be greatly increased.  As the whip tapers toward the tip, the wave of kinetic energy traveling down its length increases in speed until it exceeds the speed of sound and the whip emits the signature crack.

while there are infinite varations and designs for supersonic whips, there are three main types:  The snakewhip, the stockwhip, and the bullwhip. 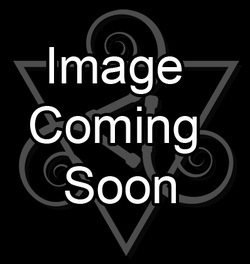 The Snakewhip closely resembles the bullwhip, save that it lacks a rigid handle, and is flexible along the entire length.  This made these whips popular in the Old West, as they could easily be rolled up to fit snugly in a saddlebag, (whereas a longer handled bullwhip would present a problem.)
Historical snakewhips were often weighted with lead in the butt end and the belly so that they could be used as a "Sap" or club. 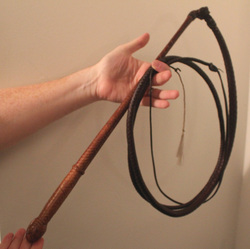 An Australian Stockwhip
The Australian Style Stockwhip shares much the same construction as the snake whip.  It features the same type of multi-layered braided thong, a fall attached by a fall hitch, and a twisted string popper on the end.  What sets stock whips apart is the long, separate handle (or "Stock") that is attached to the thong via a knuckle-like hinge knot.


The Stockwhip is far more common in Australia than the bullwhip, and is still widely used by the Australian cowboy.

Australian Stockwhips are typically much lighter than bullwhips, and with the long handle to provide ample leverage, and well suited for quick, precise cracking.
Australian whip crackers have actually developed competitive whip cracking.  Complex, two-handed whip cracking routines that combine fast, flashy moves with percussive, rhythmic cracking are developed, rehearsed, and performed in competition where they are evaluated to the same precise standards that Olympic Gymnastics are judged. 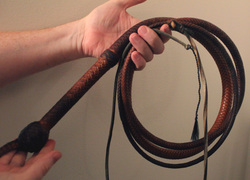 An "Indy Style" Bullwhip
The most recognizable of the supersonic whips, (at least in the United States,) is Australian Bullwhip.  These are the type of whip carried by Indiana Jones, the big-screen versions of Catwoman, etc. This is also the type of whip typically used for training students at MACH ONE whip artistry.


While there are many designs for bullwhips, they all feature a rigid handle of varying material and length that may be braided over with the same material as the whip itself, or left exposed (turned hardwood handled whips are becoming popular again, and are quite beautiful.)  One of the defining features is that the whip handle is integral to the whip (more on that in a minute.)
Beyond the handle, the flexible thong (the lash or braid of the whip) features a constant, steady taper throughout the snakelike length.  Braided length for bullwhips can vary from 3 - 30 feet.  We have found that a bullwhip between 5 and 8 feet in length is best to learn from.  Once the basic skills are mastered with a whip of this length, it is easy to move to much shorter or longer whips. 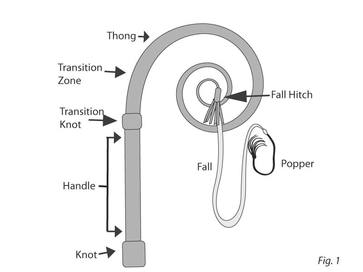 A diagram of the parts of a bullwhip
The construction and materials of the thong vary from whip to whip and maker to maker.  Traditionally, the finest whips are braided from carefully cut, stretched and beveled strands of kangaroo leather, (like the one pictured,) but whips of nylon 550 and 650 paracord, dacron are available as a more weather-resistant, less expensive kangaroo alternative, and kevlar wicking is now used to make cracking whips for fire artists.

The flexible thong consists of two parts: the Overlay, or outer layer of braiding, and the Belly, which is made up of all the layers of material beneath the overlay.  The belly of well-made whip typically consists of one or more braided layers, (literally smaller whips inside larger ones, to maintain the flexiblility, strength and efficient energy transfer system all the way to the core,) and may have a core of rolled leather, lead buckshot or copper BBs, or some other substance to give the whip consistently tapering off mass throughout the length of the braided section.

The braided length of the whip ends in a series of half-hitch knots (usually referred to as the "fall hitch" or "fall knot") that attach it to a single strand of material, (usually leather or nylon,) called the "Fall."  It is this part of the whip that tends to take the most abuse.  This is the part of the whip that drags against the ground the most.  It is also typically the fall makes contact with the target in target cutting tricks and in hard, loud cracking, it is the along the length of the fall that the whip breaks the sound barrier.  Leather falls stretch, and both nylon and leather falls break and occasionally need replaced.  Therefore, with the variable length of the fall, only the braided length of the whip is measured with Australian style whips (and this goes for snakewhips and stockwhips as well).

The last part of the Bullwhip is the cracker or popper.  This is the short, piece of braided thread ending in a tassel that you see tied on the end of the fall.  Many believe that it is the popper only that breaks the sound barrier, and for regular whip cracking, this is true.  But a whip will crack without a popper attached, though not as loudly.  It is the frayed tassel end of the popper that amplifies the whip crack.  Different types of poppers produce different sounding cracks, and there are a great many whip makers and performers who specially design poppers from different types of thread to produce different sounding of cracks.