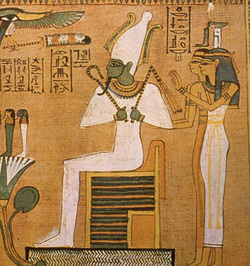 Egyptian God Osirus with crook and flail
The origins of the whip cannot be easily traced back to any single place or time. Almost every primitive culture that domesticated herd animals developed a whip of some type. Construction techniques varied, depending on culture, geographic location, materials at hand, and specific use for the whip, and ranged from woven grasses to herd cattle in Africa, seal skin to drive Innuit sled dogs across Alaska and Canada, the dried stingray tail in Southeast Asia, to human bone and skin for frightening spirits in Tibetan Bon Shamanism rituals.  Whips were used as status symbols in Ancient Egypt, and many bas relief carvings and sarcophagi sculptures of the Pharaohs depict the ruler holding the authoritarian icon of the flail in one hand, and the nurturing crook in the other.

The term “Whip” itself has many definitions ranging from political party officer, (i.e. Minority Whip,) to a slang term for assembling rapidly, (i.e. “to whip up,”)

In the context we will discuss, “Whip” has two definitions. The first is a verb form of the word meaning “to strike, lash or beat,” and the second is the noun form referring to the device that is used to perform this action. So, the word “Whip,” refers to both the act of striking and the tool used to perform said striking.

Mongolian Horse Whip
Items that are referred to as “whips” can be divided into two different categories.  David Morgan, revered whip maker who famously supplied the whips for the first three Indiana Jones films, and nigh-on singlehandedly kept the craft of whip making alive in North America throughout the 1970's, categorizes whips into two "Families;" the Mongol Whip and the English Whip.

He outlines the origins, evolution and migration of these two "Families" throughout the ages in the Second Edition of his book, Whips and Whip Making.  Morgan's approach, while certainly enlightening, is very much written from an engineering and design perspective, and does very little to address the application of these very different and infinitely varied tools.  While there is evidence supporting Morgan's decisions to attach the "Mongol" and "English" ethnicity to these specific families of whip, there is also evidence of "English" design whips in historically "Mongolian" influenced regions, and vice versa.

Therefore, to draw focus away from the ethnic origins and focus specifically on function, we chose to divide whips into a similar two categories in terms of application, and include a third, amorphous, "hybrid" category for those whips displaying traits of both "families" of whip. 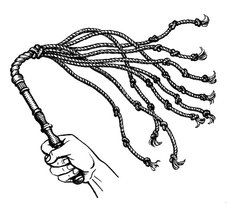 Illustration of a Cat O' Nine Tails
The first of these is the striking whip, (which equates in design and function to Morgan's Mongol Whip.) These whips are used to strike an animal or a person as either a means of motivation or punishment.  These were the earliest type of whips developed, and are by far the most prevalent seen throughout history.
Striking whips come in many styles and variations, but the most common variations are the flagellation and semi-rigid types of whips. 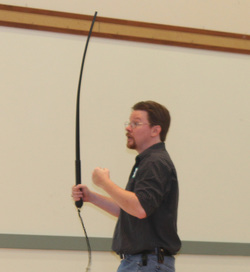 Dan with a Sjambok at a whip demonstration
Semi-rigid types of whips, (ex. the South African Sjambok -shown to the right - the buggy whip, the riding crop, and the willow or hickory wood "switch.")  While they are mostly straight and solid, they have enough springiness to add to the ferocity of their strike. These whips were certainly the most common type used to mete out punishment, and are the types of whip typically referred to in use in the school systems of Europe and Colonial America, and as well for punishment of slaves in the Antebellum South, (the common misconception, perpetuated by popular media, film, and literature is that the bullwhip was the preferred tool of cruelty for the Southern Slave Master.  While there is no doubt that bullwhips were used for punishment, their use was not as widespread as the semi-rigid type of whip.) 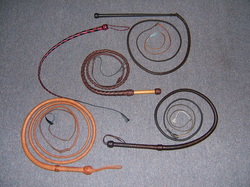 Examples of supersonic whips
The second type of whip is the "Supersonic Whip," so called because the signature cracking noise the whip makes in the right hands is created when the tip of the whip is accelerated faster than the speed of sound and creates a small sonic boom.

Again, the whip is so very old and widespread an instrument, predating written language in many cases, that it is impossible to determine when and how the supersonic whip was developed.  One possibility is that it is a direct descendent of the semi-rigid whip, and someone in antiquity noted that a semi rigid whip of considerable length, flexibility and taper would emit a sharp noise if swung with enough force.  Further trial and error in design, material, and construction refined the tool over the centuries into the supersonic whip of today.

It is also possible that man found the design in nature, as a variety of kelp,     (Nereocystis luetkeana, commonly referred to as "bullwhip kelp") could be cracked.  It could also be a combination of any or none of the above.

What we do know that the supersonic whip was developed mostly by trial, error and intuition.  The supersonic whip has been in use for at least three thousand years and it was only proven as recently as 1958 that it was indeed the tip of the whip breaking the sound barrier that caused the distinct whip crack.

The supersonic whip became quite possibly the best tool for herding large numbers of domesticated animals, and contrary to popular belief is not designed to strike the animal at all.  In fact, that's the whole point.  The use of contact whips with herd animals has some very detrimental effects.  If you hit the animal, you not only run the risk of causing a stampede, you also bruise the meat, which reduces market value.  If you strike the animal hard enough to cut it, not only do you damage the meat, you damage the hide.  So, even outside the idea of ethical treatment, you're cutting into your profit margin, which one assumes is the reason for having a herd of animals in the first place.

The supersonic whip is used like this:  Herd animals like horses, cattle, and sheep tend to dislike loud noises.  If you have a large number of them, one way to get them to go in one direction is to make a big noise to the other side of the herd.  Typically herd animals have a leader who they will follow, usually the bull.  Get the bull moving, you get the herd moving, (therefore the whip used to move the bull became the "Bull Whip."  The name has to do with the animal it was developed to motivate, not that it was made from bull-hide, as some assume.)  If you want that animal to turn to the right, you ride up on the left side of him and crack the whip.  He will turn away, and the herd will follow.  So the whip was never meant to hurt the animal, merely to guide him, (I like to say "Steering the Steer")

So, in the days before the steam engine and railway, supersonic whips in the hands of a small number of skilled cowboys were the safest and most humane method of moving large numbers of cattle or horses from ranch to market.

For more information, see the separate section of this site dedicated to an explanation of the design, function, and physics of the supersonic whip.

The last type of whip are those that display both striking and supersonic quality, but really don't fit entirely into either category.  Whips that are designed for striking and contact but can be made to crack lightly include the dog whip or quirt, and the signal whip, (usually referred to as the "single tail" whip in the Fetish community, and often mistaken for the very similar looking supersonic "Snake Whip.")  We also group the American swivel-handle bullwhip in this category, as while it seems that it was predominantly designed to be supersonic by design, it also displays a wide "Texas Style" fall, which would indicate that it was designed for making physical contact with the animals being herded.